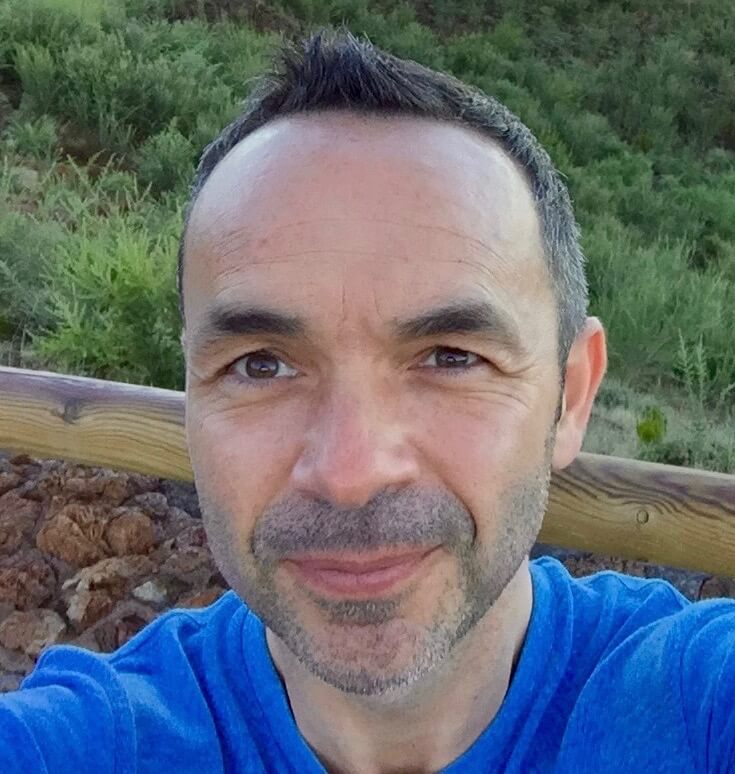 *Before and after shots used as an example. Your results may vary.

Let me tell you a little about me, because my story relates to why I’m so certain I can help you take control, stop struggling and change your life forever.

Let’s start with the physical: I used to be obese! I’m only 5 ft 5, so my 40 inch waist meant i was as round as I was tall. My thighs were so fat that the top of my things used to rub through my trousers causing holes, and my cheeks were so large that my face looked a bit like that of a chipmunk! I was ashamed of my body, and was learning to dress to hide my body.

I was obese, not because I had a problem with food, or a lack of exercise, although both these things were definitely symptoms of how I lived at that time. I was obese because I was unhappy. I just wasn’t coping with my life. The real problem wasn’t my weight, it was my inability to cope.

At work, the company I worked for was struggling, the stress was crippling me mentally and my inability to cope was changing who I was. I was bitter and resentful and angry at the world, If only I’d known more about the expectation gap back then. On top of that my relationship with my fiancee was ending as she was cheating on me (to be honest I can’t blame her.)

I had my own health concerns too, primarily caused by stress. This reached breaking point one morning around 2am, when I woke up with pains in my chest and had to call 999. It turns out that my heart was fine, and it was just stress – serious – but not a heart attack!

This event was really scary, especially given that my father had suffered 3 heart attacks and my younger brother had also had one at the age of 30! Great health didn’t exactly run in my family. This was my wake up call.

The next day I went to the doctors and when he asked me what was wrong I just broke down in floods of tears. He prescribed anti-depressants. Strangely, I left the surgery feeling much better – lit was like I was no longer being crushed by an invisible force. The emotions that I’d been holding trapped inside me had found a release. I only ever took one antidepressant tablet, and then decided that I didn’t need them. There had to be another way.

So I’d reached the bottom – I couldn’t cope, I was burnt out, I had no energy to get to the gym (one of the stories I told myself) and I used food as my primary way to feel better (although at the time I didn’t realise quite how much). Life wasn’t good, I was way off track, but I was determined to turn my life around.

I quit my job and went to university to study exercise and health science, with the huge goal of solving the weight loss problem. Whilst at university I realised that weight wasn’t the only big problem most people were struggling to cope with. Mental and emotional wellbeing is every bit as big a problem today as physical wellbeing.

When I left university I formed Kaizen Active, a fitness company with a holistic approach to helping clients get fit, lose weight and feel great. During the next 6 years we achieved some amazing things with our clients whilst learning lots about what works and what doesn’t.

At the beginning of 2016 I sold the gym to follow my passion for helping people stop struggling and transform their lives. This was when The Happiness Guy was born! There is a Vlog about loving your future self more here.

My time as personal trainer and gym owner taught me that most people need a lot more help than a gym workout, or a diet plan to follow to get sustainable results.

People need their own personal recipe for happiness, health and wellbeing and to develop this they need education, guidance and support along the way. This is what the Happiness Guy does!

Contact me today to arrange a free exploration session!

Some Posts by Gordon

Keeping a journal is one of those things you will wish you had done sooner.

Right now I’m at place where a few months ago I could’ve only dreamt of being, which is being happy. Happy with the results I’ve achieved through my training, the changes in my mood and positive thinking that’s improved my life. *

With Gordon’s support I feel more awake, definitely more balanced, happier and more motivated to continue with my new lifestyle. Our work is ongoing and I look forward to my weekly sessions and the results that we achieve together. *

With Gordon, you get someone who genuinely cares about you because he isn’t a trainer who’ll train you for an hour and then forgets about you, he’ll get to know you, become a friend and will help you in any area by going above and beyond wherever he can. *

Gordon’s help has been invaluable and life changing!!! If you want to make positive changes in your life, Gordon’s coaching will ensure the best possible chance of you forming great new habits so you can make lasting positive changes. *

All of those who attended the session have unanimously found it very relevant and extremely helpful. With more requests from the GPs for Gordon to come back again. A very big thank you from all of us for your professionalism and your dedication. It has made a big improvement to the resilience and morale of our clinical teams.

Gordon helped me achieve massive personal change. I lost the best part of 5 stone. My blood pressure is now normal, BMI is normal and I feel like a different person. Most people just need a mindset change and this is where Gordon excels. *

I continue to work with Gordon as he is exactly what a coach should be: supportive yet challenging, respectful and observant, kind and clear, the the while knowledgeable and continuing to learn. Most of all Gordon is trustworthy …. [I] highly recommend Gordon to others who seek to help themselves. *

If you are looking for someone who will help with nutrition, training programs or ‘sorting out your head’, Gordon is the best. We have managed to shift over 2 1/2 stone, 6 inches from my waist, and I’ve lost a couple of chins so far! *

Gordon encourages me to make one change at a time,  and surprisingly our sessions have never been overwhelming or physically difficult. I was expecting to be thrown in a gym and put through my paces but there’s been none of that and I’ve still achieved my original goal (to lose 2 stone). *

Gordon brought out the happy me and helped me laugh again. He is a true inspiration, incredibly understanding and a really nice guy too! *

*Testimonials and before / after shots are used as examples. Your results may vary.

Any cookies that may not be particularly necessary for the website to function and is used specifically to collect user personal data via analytics, ads, other embedded contents are termed as non-necessary cookies. It is mandatory to procure user consent prior to running these cookies on your website.